Endometriosis is a relatively common problem. Between 2~22% of women are estimated to have endometriosis, climbing to 40~60% of women with dysmenorrhea (painful periods).

Endometriosis is a chronic condition. It is the presence of cells from the uterus lining (endometrial tissue) outside the uterus. The endometrial tissue can be found in the pelvic cavity, for example on the bowels, but also in other parts of the body. It still responds to the hormonal changes of the menstrual cycle in the same way than the cells in the uterus lining which leads to bleeding, inflammation and pain.
Some women are unaware that they have endometriosis or have very mild symptoms. Others however experience pain, from mild to severe, painful sex, heavy bleeding and fertility problems.

Western medicine approach to the treatment of endometriosis include painkillers such as NSAIDs, hormone treatments such as the combined oral contraceptive pill and surgery, most commonly through laparoscopy. There is no definite cure for endometriosis and the management of pain in women with endometriosis is often inadequate. 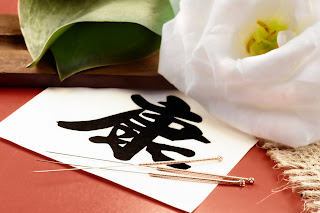 How does Acupuncture help with endometriosis

In Chinese Medicine, endometriosis is seen mainly as an issue with Blood Stagnation (which is exactly what it sounds like) with some associated pathologies (Heat, Cold, Qi deficiency…).
The aim of the treatment will be to reduce the pain, reduce the Blood stagnation and regulate the menstrual cycle.

As it is often the case with acupuncture,  the length of treatment will vary a lot from one person to the next. However, endometriosis usually requires regular treatment on a on longer term than other conditions, around 3 to 9 months.

{"timed-popup-delay":30,"cookie-duration":14,"popup-selector":"#popup-box-sxzw-1","popup-class":"popupally-opened-sxzw-1","cookie-name":"popupally-cookie-1","close-trigger":".popup-click-close-trigger-1"}
Find this helpful?
Get free proven ideas and strategies in your inbox.
Your information will *never* be shared or sold to a 3rd party.